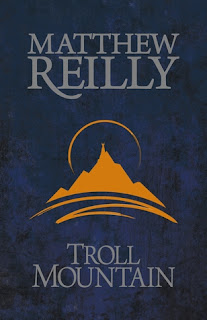 "..An elixir is not a magic liquid. It is knowledge. Bottles filled with magic liquids eventually run dry, but knowledge lasts a lifetime..."

In a remote valley, a tribe of humans is being killed off by a terrible disease.There is a rumor that the trolls of Troll Mountain have a cure for the illness: a miraculous elixir.When Raf's sister gets sick and his tribal leaders refuse to help him, he makes a courageous decision. He sets out on his own for Troll Mountain ... to steal the elixir.Along the way he finds allies in the outcast warrior Ko and the lost Troll Dum. Their quest into Troll Mountain is more than the mission to find the elixir to cure the disease but along the way Raf realizes that all the truths he had once known may have been lies to keep him in his place. The ruling families of the village may have been keeping the truth away from the rest of the village to keep their hold over all the others. In Troll Mountain he finds the Troll King who holds dominion over the valley by force and blood. Will Raf find in himself the warrior to overcome the dangers of Troll Mountain? Will he learn the true secret of Troll Mountain?