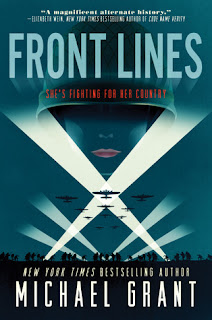 
1942. World War II. The most terrible war in human history. Millions are dead; millions more are still to die. The Nazis rampage across Europe and eye far-off America.The green, untested American army is going up against the greatest fighting force ever assembled—the armed forces of Nazi Germany.But something has changed. A court decision makes females subject to the draft and eligible for service. So in this World War II, women and girls fight, too.As the fate of the world hangs in the balance, three girls sign up to fight. Rio Richlin, Frangie Marr, and Rainy Schulterman are average girls, girls with dreams and aspirations, at the start of their lives, at the start of their loves. Each has her own reasons for volunteering. Not one expects to see actual combat. Not one expects to be on the front lines.Rio, Frangie, and Rainy will play their parts in the war to defeat evil and save the human race. They will fear and they will rage; they will suffer and they will inflict suffering; they will hate and they will love. They will fight the greatest war the world has ever known.New York Times bestselling author Michael Grant has created a masterful alternate history of World War II in Front Lines, the first volume in a groundbreaking series.

She cannot, will not, spend the war in a swivel chair.