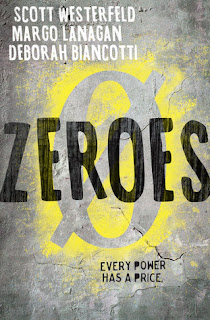 
Don't call them heroes. But these six Californian teens have powers that set them apart

Filled with high-stakes action and drama, Zeroes unites three powerhouse authors for the opening installment of a thrilling new series.

Within these pages you will meet six unique teens.Nate/Bellwether (aka Glorious Leader) has the ability to bend the will of crowds, to make them follow him.Chizara/Crash can crash anything electronic, hence the name. But the downside to her power is that even being near electronics hurts her to her very bones, makes her brain itch.Riley/Flicker is blind, but can see through the eyes of others.Thibault/Anonymous finds it incredibly easy to disappear, but the flip side of this is that no one can remember him unless they’re looking at him. If any more than five people are present, he becomes downright invisible. Ironically, one of the most memorable characters.Ethan/Scam can open his mouth and let another voice take over. Another voice which knows truths about the people it’s speaking too, truths he would have no way of knowing. But it gets him into trouble.Kelsie/Mob can affect the mood of a crowd, making them feel better, happier, more alive. But it can also have a negative affect, redoubling anxious or fearful emotions.It sounds like a really interesting combination of people, a really interesting story. It sounds like it could be mind blowing and fascinating. It sounds like it could be a book of the year.