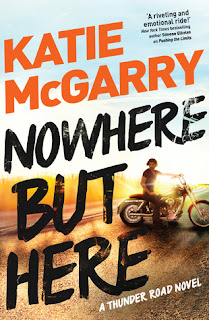 An unforgettable new series from acclaimed author Katie McGarry about taking risks, opening your heart, and ending up in a place you never imagined possible.

Sizzling, suspenseful and unputdownable. A gripping story about finding freedom, forgiveness and love.

At seventeen, Emily lives a pretty quiet life with her family and friends in Florida… but when she was ten she found out that the man she calls Dad isn’t her biological father and every year she tolerates his one visit to see her but never really digs deeper because he made the choice to give her up. Her mum raised her by herself and that means more to her than someone who shows up in her life suddenly claiming to want to know her. An email from her father turns her life into a tailspin. Someone has died and that means the family is heading back to the town that her mother fled when she found out she was pregnant.But Emily hasn’t been let in on a lot of what really happened in her mother’s past and ultimately hers. The story her mom told her may not be exactly how everything went down and it turns out that the only person Emily seems to find herself trusting is Oz… Emily’s real father is the leader of the bike club, Reign of Terror. They aren’t exactly like some of the clubs out there… Most of the members work with the security company the club runs and Oz is bound and determined to be patched into both the club and the security detail. But Eli, Emily’s dad, decides to have him watch over his daughter instead of work with the team out on the roads, and what starts as merely tolerating each other starts to grow into much more.


“Running is still running. It doesn't matter if it's a physical move from one place to another or if it's to within yourself.”
― Katie McGarry, Nowhere But Here