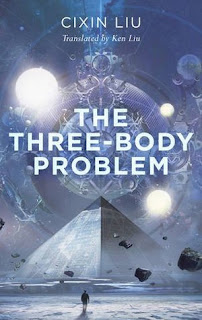 The Three-Body Problem: Particle physics, the rise and fall of civilizations, and alien contact


The Three-Body Problem is the first chance for English-speaking readers to experience this multiple award winning phenomenon from China's most beloved science fiction author, Liu Cixin.

This book is bursting with fascinating ideas about the rise and fall of civilizations, virtual-reality gaming, mind-blowing particle physics, the lonely life of scientists and intellectuals, the madness of the Chinese Cultural Revolution, and alien contact as well.Set against the backdrop of China's Cultural Revolution, a secret military project sends signals into space to establish contact with aliens. An alien civilization on the brink of destruction captures the signal and plans to invade Earth. Meanwhile, on Earth, different camps start forming, planning to either welcome the superior beings and help them take over a world seen as corrupt, or to fight against the invasion.

The Three-Body Problem is split into three main narratives:1) The backstory of scientist Ye Wenjie, who grew up during the madness of the Cultural Revolution and saw her father killed for his scientific ideas. She ends up grudgingly working at a secret military facility in the 1970s dedicated to making alien contact, but never has trust in humanity after suffering various betrayals.2) The modern-day story of Wang Miao, a scientist studying nano-fibers, who is dragged into an investigation of a string of mysterious suicides among prominent particle physics researchers. His tale takes up the bulk of the book, and for much of the novel both he and the reader are in the dark as to what is going on. The further he gets involved with the secretive group The Frontiers of Science, the more he realizes that there are numerous conspiracies occurring, all involving scientists, alien contact, and a mysterious game called Three Body.3) The virtual reality game called Three Body, in which players can observe and try to influence the course of an alien civilization in a far-off world that has three suns orbiting in a non-stable configuration. Because of the suns’ irregular behavior, the planet’s civilizations must struggle to advance during brief stable eras before the suns approach or recede and usher in chaotic eras, destroying all life. To survive this, the aliens develop the ability to dehydrate and wait until the next stable era. However, these eras are so unpredictable that 180 civilizations have already been destroyed, but still they try to advance their scientific knowledge in order to solve the Three-Body Problem.
Stuart- Goodreads