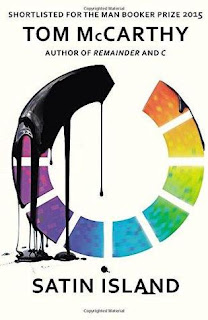 *‘A Kafka for the Google Age’ Daily Telegraph*

Mr Mannins and Mr  Lemire- this one is a book you would like!!!


“Forget family, or ethnic and religious groupings: corporations have supplanted all these as the primary structure of the modern tribe.”
― Tom McCarthy, Satin Island

U. is a 'corporate anthropologist' who, while working on a giant, epoch-defining project no one really understands, is also tasked with writing the Great Report on our society. But instead, U. spends his days procrastinating, meandering through endless buffer-zones of information and becoming obsessed by the images with which the world bombards him on a daily basis: oil spills, African traffic jams, roller-blade processions.
Is there a secret logic holding all these images together? Once cracked, will it unlock the master-meaning of our era? Might it have something to do with the dead parachutists in the news? Perhaps; perhaps not.

“The first move of any strategy of cultural production, he’d say, must be to liberate things – objects, situations, systems – into uselessness.”