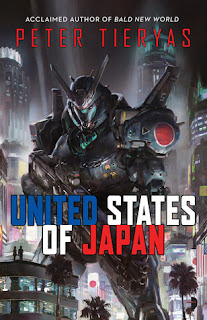 
“Why don’t people fight for change?” “Because the ones who do get hunted down.”
― Peter Tieryas, United States of Japan


The United States of Japan continues the journey that was started by Phillip K. Dick back in the 1960s. Set in an alternative 1980s, the United States of Japan depicts a world where Japan won World War Two. Most Americans now worship the Emperor, and history has been changed to a point where Japan's role in the war is now viewed to be nothing short of exemplary and honourable. Japanese civilisation stands unchallenged at the pinnacle of technological development and cultural dominance, until now. A group, known as the 'George Washington's' are starting to disrupt the regime by spreading an underground game that allows players to imagine a world where the Allies won the war. In order to stop these attacks video game censor Captain Beniko (hereafter referred to as Ben) Ishimura and secret police operative Akiko Tsukino are assigned to solve the mystery of this revolutionary group and stop it. But everything is not as it seems, and the enemy they are hunting may in fact not be the enemy after all. - Matthew Goodreads.com

"United States of Japan is much more than your typical alternate history novel. It is also a thriller novel, a spy novel, and a detective story. The author’s imagination is running wild, and we see that with all the cool gadgets and weaponry. Besides the technical wizardry, the book has almost non-stop action. Character development is another strong suit. I would highly recommend United States of Japan if you enjoy reading alternate history and thriller novels."

There are amazing quotes in this book- wow quotes!

“I think most people are afraid to love because they want the freedom to suffer alone.”
― Peter Tieryas, United States of Japan