The Book of Pearl 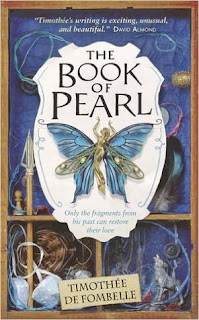 
The Book of Pearl is a modern fairy tale with elements of the classics, filled with strange places, magical laws and intriguing mysteries.
It was engaging and tasteful and came together like a tidy tapestry.
Delightfully written, it is the interwoven stories of four people, connected by various threads, both direct and indirect.
Enchanting and beautiful, with a tinge of the unusual.

"It is, overall, the story of a boy from a world we have ceased to believe in. Snatched away from his haunted, spectral life, he is deposited into our world, France, sometime in the 1930s. Here, he makes a new life for himself, joining the Pearls in their quaint marshmallow shop. But war changes everyone, and it transforms the boy into Joshua Pearl, opening his eyes to our harsh reality. Joshua clings to the memories of his past, and as those begin to fade, he sets upon a quest to collect strange objects, fragments from tales that had already been told. Fragments that he hopes, one day, will see him home.
Entwined with Joshua's tale is that of Oliå, once a fairy, now just an ordinary, albeit beautiful, girl. Love led her through into our world, but along with it came a curse. If he ever sees her, she will cease to exist. And so she must remain in the shadows, a ghost, observer and sometime savior, never able to touch, or even see the recognition or love in his eyes. Never aging, never changing, and never able to truly settle.Lovingly interspersed amongst these tales is the true fairy tale that begun it all: A boy, all but alone in his island sanctuary, who falls in love with a fairy. The prince, a cruel ruler with a cold heart and a desire for revenge on the sister deemed responsible for the death of their mother; a hunter who will never cease the hunt until his quarry is found.And, shrouding them all, the final narrative, that of the unnamed author, whose chance encounter, as a teenager, with a beautiful girl, followed by rescue from a mysterious man, will have echoes on, into his future."The Book of Pearl" is a book of many layers, like those that form around the pearl's core. It is rich in language, exquisite in imagery, and truly a modern fairy-tale. It is a book to savour, like an artisanal marshmallow, or a pearl.- Angela Oliver- goodreads.com