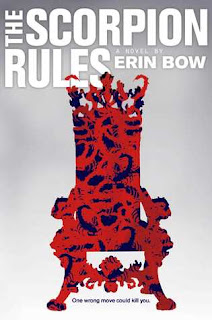 
“Let me tell you a story. Once upon a time, humans were killing each other so fast that total extinction was looking possible, and it was my job to stop them.”


A world battered by climate shift and war turns to an ancient method of keeping peace: the exchange of hostages. The Children of Peace - sons and daughters of kings and presidents and generals - are raised together in small, isolated schools called Prefectures. There, they learn history and political theory, and are taught to gracefully accept what may well be their fate: to die if their countries declare war.

Greta Gustafsen Stuart, Duchess of Halifax and Crown Princess of the Pan-Polar Confederation, is the pride of the North American Prefecture. Learned and disciplined, Greta is proud of her role in keeping the global peace — even though, with her country controlling two-thirds of the world’s most war-worthy resource — water — she has little chance of reaching adulthood alive.

Enter Elián Palnik, the Prefecture’s newest hostage and biggest problem. Greta’s world begins to tilt the moment she sees Elián dragged into the school in chains. The Prefecture’s insidious surveillance, its small punishments and rewards, can make no dent in Elián, who is not interested in dignity and tradition, and doesn’t even accept the right of the UN to keep hostages.

What will happen to Elián and Greta as their two nations inch closer to war?


“Did you know, the man who invented the atomic bomb once said that keeping peace through deterrence was like keeping two scorpions in one bottle? You can picture that, right? They know they can't sting without getting stung. They can't kill without getting killed. And you'd think that would stop them." He gave the book another boot, and it flipped closed with a snick. "But it doesn't." He looked up and his eyes were the color of Cherenkov radiation, the color of an orbital weapon. "You've got a bit of nerve, little scorpion. All I did was invent the bottle.”
― Erin Bow, The Scorpion Rules