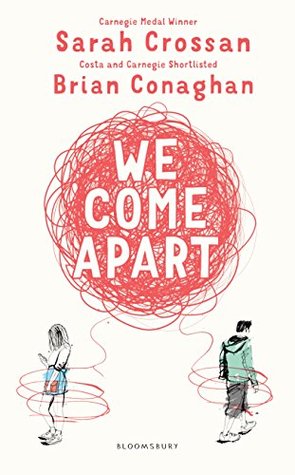 I am a huge fan of Sarah Crossan. Apple and Rain was my favorite book  in 2015. I don't really even know why- I think it was because she writes like you are there, she described by Gran and I could see it, taste it and engage in the story. I loved the 100 word sub plots. One- was also a stunner but needed to many tissues. So here she goes again-!! More tissues needed!!
This book is definitely coming out at the right time (with what's happening around the world right now) and its message is immensely powerful.
It follows two unlikely friends as they meet and get to know each other as a part of a juvenile reform course due to both Nicu and Jess being caught shoplifting. Nicu has recently emigrated to the UK from Romania and Jess lives in an unsafe and abusive home. A good thing about this book was the way the racism was portrayed. People were so cruel to Nicu because of his skin colour and because he was Romanian. It wasn't just students who were malicious but teachers and adults too. I don't know how people can be so awful to others just because of their skin colour, their religion or their place of origin etc but that prejudice is everywhere these days. So many people are for Brexit, the Muslim ban, the wall etc because they don't want foreigners in their country. It's absolutely ridiculous and this book portrays just a bit of that hate towards Nicu & his family.-Sarah

Authors Brian Conaghan and Sarah Crossan have joined forces to tell the story of Nicu and Jess, two troubled teens whose paths cross in the unlikeliest of places.

Nicu has emigrated from Romania and is struggling to find his place in his new home. Meanwhile, Jess's home life is overshadowed by violence. When Nicu and Jess meet, what starts out as friendship grows into romance as the two bond over their painful pasts and hopeful futures. But will they be able to save each other, let alone themselves?
For fans of Una LaMarche’s Like No Other, this illuminating story told in dual points of view through vibrant verse will stay with readers long after they've turned the last page.


‘But I want to stay here.’ I praying to them.
‘Here, what is here?’ Tata say. ‘People hate us here.’
‘Nicu, people here only see our skin, not the thing
within,’ Mamica say,