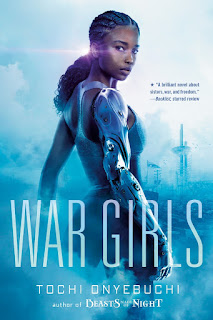 "... It is brutal, action-packed, and heartbreaking, and it is a masterpiece. It takes an author of great skill to instill such hope, love, and humanity into a topic of such intimate emotional pain, as a child of a mother who survived the civil war that inspired the book" Julie from Goodreads

Two sisters are torn apart by war and must fight their way back to each other in a futuristic, Black Panther-inspired Nigeria.The year is 2172. Climate change and nuclear disasters have rendered much of earth unlivable. Only the lucky ones have escaped to space colonies in the sky.In a war-torn Nigeria, battles are fought using flying, deadly mechs and soldiers are outfitted with bionic limbs and artificial organs meant to protect them from the harsh, radiation-heavy climate. Across the nation, as the years-long civil war wages on, survival becomes the only way of life.Two sisters, Onyii and Ify, dream of more. Their lives have been marked by violence and political unrest. Still, they dream of peace, of hope, of a future together.And they're willing to fight an entire war to get there.

These quotes say it all....

“Peace is not given,” Ngozi says in a voice as hard as the metal of an Igwe. “It is taken. For so long, they have visited violence upon us. It never starts with machetes. It starts with shutting the Igbo out of government. Then it becomes giving all the good jobs to the Hausa andthe Fulani and the Yoruba. Then we are accused of crimes we do not commit. Called animals. They say we infest this country. Then we become the reason the Sahara grows larger and more and more of Nigeria turns to desert. We are blamed for the drought. We are blamed for the radiation. Then we are thrown in jail. Then we are murdered.”

“We have tried peaceful protest,” Ngozi continues. “We have tried marching. We have tried registering even those Igbo in the hinterlands to vote in the elections.” She speaks not like she’s reciting from an article or from some downloaded history but from life experience. She speaks like someone whose parents argued politics over thetable at family dinners, like someone who was carried in her father’s arms during those peaceful marches. She speaks like someone who knew a period before war. Before it all turned to violence. “You do not meet hate with love. Some will say that when a hateful person makes you hate, they win. But those people will never say what exactly it is that that hateful person wins. They will say that if you resist hate and meet it with love, that you win. But they never tell us what we win. We see with our eyes. We see that the only thing we win is death by machete. Isolation. Massacre.” Her frown deepens. “They did this”