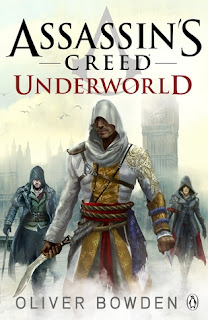 
A disgraced Assassin. A deep-cover agent. A quest for redemption.

This week in the library we have had two days for the staff only. They come and eat amazing food, lounge on the beanbags, drink good coffee and select books to read for summer. Our long suffering students have to watch from the outside desperate to get there hands on the mellow-puffs and strawberries!
What did the staff go for and demand! Assassin's Creed books- and when they saw this new one, we nearly had an assassination in the library!!! In fact I cant remember who dibs it first, let me know if you read this! So what is it all about..

1862, and with London in the grip of the Industrial Revolution, the world's first underground railway is under construction. When a body is discovered at the dig, it sparks the beginning of the latest deadly chapter in the centuries-old battle between the Assassins and Templars.Deep undercover is an Assassin with dark secrets and a mission to defeat the Templar stranglehold on the nation's capital.Soon the Brotherhood will know him as Henry Green, mentor to Jacob and Evie Frye. For now, he is simply The Ghost.Assassin's Creed: Underworld is the tie in book to ‘Assassin's Creed: Syndicate’ and the eighth gripping novel from Oliver Bowden.