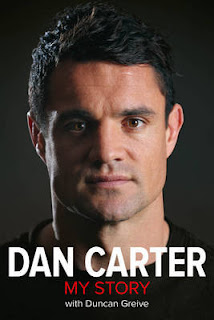 The next few days I am going to blog my summer reading list. First of the rank is Dan Carters story.
Dan and I have a few things in common- how can that be you ask- I am a female aging( Na kidding about that bit...) librarian from Cambridge. What could possibly have in common- 5 things!
First he is a Cantabrian who grew up on a farm like I did. There are so many cultural attachments to being a farmers kid, I bet he went out in the snow and rescued lambs in September!
Second- he knows about hockey
Third- He thinks Red and Black is a stunning colour combination
Fourth- he is loyal to his province, I so respect that!  and
Fifth- he celebrated like a maniac when we defended the Rugby World Cup.
I cant wait to read this book and learn more about  this humble , modest and understated man  who is not only a legendary rugby player but a darn good man.

who became a world superstar - the greatest fly-

half in international rugby. Dan Carter is the world

record holder for most test points, has twice been

named the IRB's Player of the Year and twice New

Zealand Player of the Year. In this memoir he

opens up for the first time about his stellar 12-year

career, looking back on the highs, and, with an

equal measure of honesty, the lows of his career.