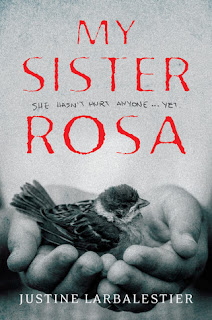 What if the most terrifying person you'd ever met was your ten-year old sister?

Today is international Sibling Day- so here is a book about a brother and his sister! It is no ordinary story...
My Sister Rosa is a clever, creepy, and thought-provoking YA thriller. ingeniously constructed, charismatic and terrifying. The narrative wheedles into your brain, wrong-footing you, making you doubt yourself and triumphing over you in its beautifully constructed twists and turns. I. Could. Not. Resist. It.- Rachel

I promise,' said Rosa. 'I won't kill and I won't make anyone else kill.'

I can't see the loophole. Since the guinea pig there's been nothing. Months now without Rosa killing as much as a mosquito.

As far as I know.Che Taylor has four items on his list: 1. He wants to spar, not just train in the boxing gym. 2. He wants a girlfriend. 3. He wants to go home. 4. He wants to keep Rosa under control.


'You're going to have to look out for Rosa, you know,' Sally told me.
'Protect her from the world,' David said. 'You're her big brother.'Protect the world from her, he didn't say.

Picture this: your baby sister is a psychopath, and you've known all along ... even if no one -- especially not your parents -- believes you when you warn them. You know it's only time before she breaks her promise to you and really hurt (if not kill) someone, and you're doing your best to protect her in the only way you know how. You want to hate her, but you can't bring yourself to. How can you, after all, when you are like everyone else who loves your charming little sister? Che's little sister Rosa is smart, talented, pretty, and so good at deception that Che's convinced she must be a psychopath. She hasn't hurt anyone yet, but he's certain it's just a matter of time. And when their parents move them to New York City, Che longs to return to Sydney and his three best friends. But his first duty is to his sister Rosa, who is playing increasingly complex and disturbing games. Can he protect Rosa from the world - and the world from Rosa?