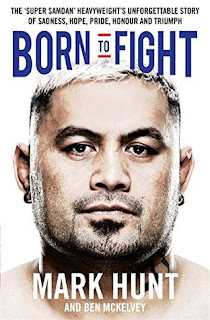 
Should a good man fight?

This is the "Super Samoan" heavyweight's unforgettable story of sadness, hope, pride, honour and triumph.

A fighter, mental illness, suicide, childhood abuse, born in the 1970's, crime, jail, Auckland.... Hunt pulls no punches in telling his story in an honest, yet sympathetic way.

Hunt was born in Auckland, into a large Samoan family, and was a troubled child eventually leading to two jail terms for violent offending. He had no intention to be a professional fighter until a late night altercation outside a nightclub just after getting out of jail for the second time in Auckland changed the course of his life. The brawl did not last long, and Hunt knocked out multiple people. Sam Marsters, one of the bouncers at the door was impressed by the young man's knockout power and invited him to his gym to take up formal training, and a week later, Hunt won a Muay Thai kickboxing match via knockout. Hunt received a six-pack of beer as a reward for the fight. Later that year Hunt moved to Sydney, Australia, to train with Alex Tui, and few years later he settled in Liverpool Kickboxing Gym under Maori instructor Hape Ngaranoa. The rest is history... Wikipedia

"Inspiring and harrowing, a compelling insight into how Mark Hunt survived a childhood of abuse, hunger and hatred to become one of the greatest fighters and a great father."