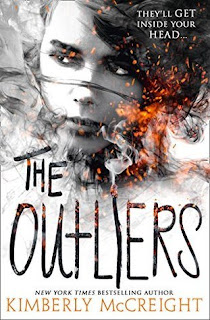 
“Why are the bad things always so much easier to believe? It shouldn't be that way but it is every single time, you're too sensitive, and too worried they say, you care too much about all the wrong things. One little whisper in your ear and the words tumble through your head like you're the one who thought them first. Hear them enough and pretty soon they're etched on the surface of your heart.”

Imagine if you could see inside the minds of everyone around you – your best friend, your boyfriend, your enemies…? Imagine how valuable you'd be… Imagine how much danger you'd be in… Imagine being an Outlier.

The Outliers is a novel that sits somewhere between contemporary, mystery, and thriller, which makes it a unique beast. The story begins with Wylie, who in the wake of her mother’s death has been left deeply anxious and agoraphobic. She receives a text message from her estranged friend, Cassie, asking for help-- and not to tell her mother or police. The mystery mounts as Wylie makes her way out into the wilderness with Jasper, Cassie’s boyfriend, in the hopes to get Cassie out of whatever trouble she has landed herself in. But they have no idea what kind of danger they’re headed towards, and worse yet, Cassie's texts grow more frantic before going silent-- making Jasper and Wylie fear the worst. - Katie Carson -Goodreads.com