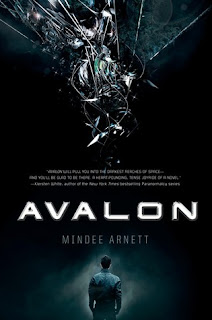 
Another cover that is awesome- good cover- immediate buy! Its art!

A crew of teenage bandits who inhabit the spaceship Avalon find a conspiracy that could threaten their entire galaxy in this fast-paced sci-fi hit of a novel from author Mindee Arnett. Of the various star systems that make up the Confederation, most are a couple thousand light-years from Earth, and out here, no one is free. The agencies that govern the Confederation are as corrupt as the crime bosses who patrol it, and power is held by anyone with greedy and ruthless enough to claim it. That power is taken from one thing: metatech, which allows people to travel vast distances faster than the speed of light. Jethro Seagrave and his crew of teenage bandits survive in this world by stealing unsecured metatech, and they are damn good at it. Jeth doesn't care about the law; all he cares about is earning enough money to buy back his parents' ship, Avalon, from his crime-boss employer, Hammer Dafoe, and getting himself and his sister, Lizzie, the heck out of Dodge, but when Jeth finds himself knowing information that the crime bosses and the government are willing to kill for, he is going to ask himself how far he would go to get the freedom he's yearned for.
With pulse-pounding action, a captivating mystery, and even a bit of romance, Avalon is the perfect read for hard-core sci-fi fans and non-sci-fi fans alike.

"It was like Firefly, Pandorum, and all the Star Treks mixed into a book of awesomeness!!!! I can't wait for book 2 :), tense joyride of a novel."