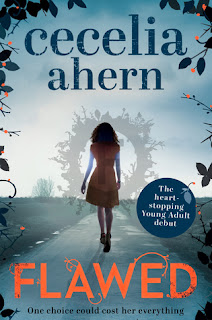 “I know the difference between right and wrong. I understand the rules. But today I feel that the rules have been blurred, because today they were literally on my front doorstep.”
― Cecelia Ahern, Flawed

This is the story of Celestine North who lives a perfectly flawless life with her parents and her younger brother and always abides by the rules, set up upon by The Guild when the government failed to bring upon peace among its citizens, unlike her unruly and smart-mouthed younger sister. Celestine has nothing to worry about, with glowing dreams of being a mathematician along with her perfect boyfriend, Art, who happens to be the son of Judge Crevan who is the leader of The Guild. But one small mistake lands her up face-to-face with Judge Crevan in the courtroom, who will judge whether her mistake is forgivable or punishable, resulting which she might be branded as "FLAWED.
When perfect Celestine decides do the right thing by aiding an ailing man on the bus, she is arrested and put on trial.
The Guild strives for perfection with the assistance of an army of whistle blowers and a populace ever keen to spy on and report their neighbours, friends and even family for the slightest perceived immoral or unethical deviance from the norm. To be accused and found guilty of a deviance results in becoming one of the “Flawed” – an ever growing group of people who have been physically branded, forced to wear arm bands and ostracised from society, forced to live to a very strict and harsh regime. Our 17 year old heroine, Celestine, has always tried to be a good girl. She is a promising student who doesn’t want to draw attention to herself. She just tries to live her life by the code; that is, until she finds herself accused of being flawed.