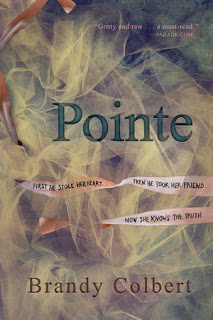 Location: FIC COL
Genre: Ballet, Coming of Age  and a bit of romance with a eating disorder thrown in! Very awesomely the lead protagonist is Afro American

It's dark, it's sympathetic, it's suspenseful and intense, it's graceful and powerful.

Theo is better now.She's eating again, dating guys who are almost appropriate, and well on her way to becoming an elite ballet dancer. But when her oldest friend, Donovan, returns home after spending four long years with his kidnapper, Theo starts reliving memories about his abduction—and his abductor.Donovan isn't talking about what happened, and even though Theo knows she didn't do anything wrong, telling the truth would put everything she's been living for at risk. But keeping quiet might be worse

People fawn over the beauty of dance. The long legs and elegant shoes and expertly twisted buns. And it's not that they're wrong. Those are all part of the reason I was drawn to ballet at the age of three. But I'd be willing to bet those same people have never set foot in the dressing room of a dance studio. Because you can't quite look at it the same once you've been to the other side