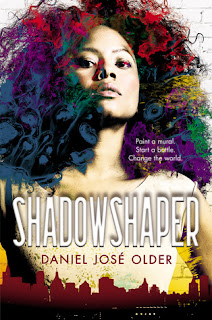 PAINT A MURAL
START A BATTLE
CHANGE THE WORLD.

Rick Riordan reviewed this book far better than I can..

"Im a big fan of Older's adult urban fantasy series Bone Street Rumba, so I was curious to see how his style would translate into a young adult novel. The answer is beautifully.

Sierra Santiago is a typical Brooklyn teenager just starting her summer vacation. She plans to hang out with her friends, have some fun, and finish painting her dragon mural on the wall of an old half-finished high-rise development called the Tower, which otherwise is an unwelcome eyesore in the neighborhood. Sierra's summer plans go sideways when she notices other murals in the neighborhood beginning to change. The colors fade. The faces cry and change expression. Her grandfather, debilitated from a stroke, becomes lucid just long enough to warn her: She is in danger. Her whole family and the neighborhood itself will be destroyed. She must find a boy named Robbie, and together they must finish her mural quickly.

Sierra doesn't understand any of this, but she tracks down Robbie at a friends' pool party. Before they can even talk, a strange pale man like a zombie invades the party and chases after them, demanding to know where Lucera is -- someone Sierra has never heard of.

Soon Sierra learns she is part of the community of shadowshapers -- those who can call upon the spirits of their ancestors and other local ghosts to take form in art, music or even storytelling. With a quick scribble of chalk, you can form a stick figure that comes alive to fight for you, or a pair of eyes that flies off into the night and spies for you. Imagine what you could do with a meticulously painted wall mural of dragons or skeletons . . .

Unfortunately, someone is after the shadowshapers. Someone wants to take all their power for himself, and if he can't, he will destroy them. Sierra and Robbie are faced with an enemy who can bind and distort spirits, and even create horrible zombie-like corpuscles from the murdered bodies of people Sierra used to know. (GROSS!) If Sierra doesn't learn to use her powers quickly, everything she loves will be obliterated.

Older's novel is a real page-turner. The pacing is perfect with short, well-crafted chapters. The characters immediately grab you. Sierra has a wonderful cast of friends to help her, and Older's teenage Brooklyn dialogue is so spot-on and punchy that reading it is like breathing fresh oxygen. I am tempted to think Older is a shadowshaper, because he definitely has the ability to channel spirits straight into the writing and bring them to life.

Bring on the sequel, please!