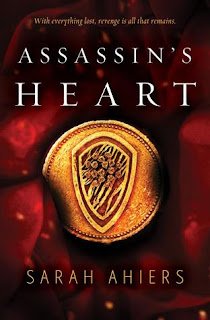 
"WITH EVERYTHING LOST, REVENGE IS ALL THAT MATTERS!"

With shades of The Godfather and Romeo and Juliet, this richly imagined fantasy from debut author Sarah Ahiers is a story of love, lies, and the ultimate vengeance.

In the kingdom of Lovero, nine rival Families of assassins lawfully kill people for a price. As a highly skilled member of one of these powerful clans, seventeen-year-old Lea Saldana has always trusted in the strength of her Family. Until she awakens to find them murdered and her home in flames. The Da Vias, the Saldanas’ biggest enemy, must be responsible—and Lea should have seen it coming. But her secret relationship with the Da Vias’ son, Val, has clouded her otherwise killer instinct—and given the Da Vias more reason than ever to take her Family down.Racked with guilt and shattered over Val’s probable betrayal, Lea sets out to even the score, with her heart set on retaliation and only one thought clear in her mind: make the Da Vias pay.


"I could have stayed in this amazing world forever!


Truly, the assassin families, the politics, the bloody gods were so real and well formed. I not only believed them, but felt I was among them, the smell of oiled leather and smoke bombs filling my nose. This world was alive and pulsing with intrigue.

The streets jumped off the page. The characters were full of secrets. And the ghosts were terrifying! So much fun!!!"  Adriana Mather