I Crawl Through It 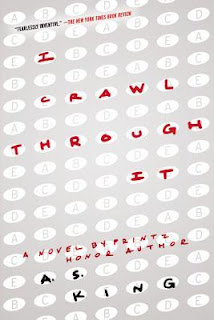 “Somewhere in every mind is an opening to crawl through.”

Four teenagers are on the verge of exploding. The anxieties they face at every turn have nearly pushed them to the point of surrender: senseless high-stakes testing, the lingering damage of past trauma, the buried grief and guilt of tragic loss. They are desperate to cope, but no one is listening.
So they will lie. They will split in two. They will turn inside out. They will even build an invisible helicopter to fly themselves far away...but nothing releases the pressure. Because, as they discover, the only way to truly escape their world is to fly right into it.

"I cannot decide if this was the most bizarre or most brilliant book I have ever read. I think it was about some terribly traumatic things that can happen while you're a teen. I think it was about the pressure and stress of growing up in this fast-paced, high pressure world. There may or may not have been an invisible helicopter. It sounds disjointed and unpolished, but I think that was the point. Everything you read here is up for interpretation. This is something that would benefit from multiple readings and every reading may result in a new and different realization. The ultimate realization will be that A.S. King is brilliant and it doesn't matter if you "get" it or not - you'll still read every thing she ever writes because you'll feel like you're missing out on something if you don't."- Brittany Goodreads.com

"We're alive. We have words and shapes and ideas. We will throw them at you when you do not believe. We will throw our love and our hate and our failure and success. We'll split in two right in front of you and be our best and our worst. We'll lie and tell the truth.”