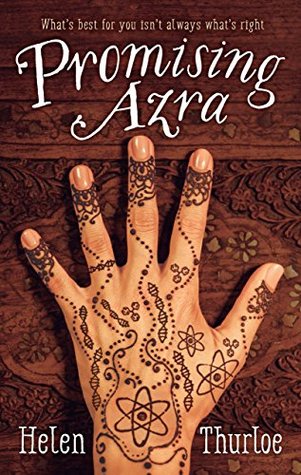 Honour Killings are in the news at the moment. I read about a young woman who was murdered by her family as she married a young man not appropriate to them. He was a Christian but converted to Islam so he could marry the girl he loved- they still shot her dead.
About 5,000 women are murdered by their families each year, according to the United Nations. The majority of them are South Asian women who defy their family’s wishes around marriage.

'I would do it again 100 times': Muslim father 'murdered his THREE daughters in honour killing for dating wrong boys'

It is a hideous thing and this book tackles the issue of arranged marriages that young woman are forced to enter and therefore the choices they are forced to abandon...

Azra is sixteen, smart and knows how to get what she wants. She thinks. When she wins a place in a national science competition, she thinks her biggest problem is getting her parents' permission to go. But she doesn't know they're busy arranging her marriage to an older cousin she's never met. In Pakistan. In just three months' time.Azra always thought she'd finish high school with her friends and then go on to study science, but now her dreams of university are suddenly overshadowed. Can she find a way to do what she wants, while keeping her parents happy?Or does being a good daughter mean sacrificing her freedom?