The Many Selves of Katherine North 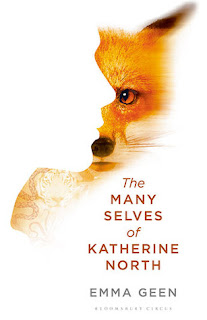 When we first meet Kit, she's a fox

I wonder what I would chose to morph myself into- an owl maybe? Something with a birds eye view anyway. But an Elephant would be pretty good- intelligent, never forgets, family orientated and not too many natural enemies!
This story is about a person inhabiting  different animals like  seals, snakes, spiders, tigers and polar bears to name a few. I particularly liked Katherine's time as a fox living in an urban environment. Set at a time slightly in the future where climate change is threatening endangered populations of animals, humans have developed the ability to transfer their consciousness into 3D synthetic living breathing animals. This allows them to live as that animal for short periods and mix with wild populations to study their habitat and ability to find food. Teenagers are generally recruited for this research as their brains are most plastic and able to cope better with the shock of finding themselves inside the body of another species..

Nineteen-year-old Kit works for the research department of Shen Corporation as a phenomenaut. She's been “jumping”--projecting her consciousness, through a neurological interface--into the bodies of lab-grown animals made for the purpose of research for seven years, which is longer than anyone else at ShenCorp, and longer than any of the scientists thought possible. She experiences a multitude of other lives--fighting and fleeing as predator and prey, as mammal, bird, and reptile--in the hope that her work will help humans better understand the other species living alongside them.

Her closest friend is Buckley, her Neuro--the computer engineer who guides a phenomenaut through consciousness projection. His is the voice, therefore, that's always in Kit's head and is the thread of continuity that connects her to the human world when she's an animal. But when ShenCorp's mission takes a more commercial--and ominous--turn, Kit is no longer sure of her safety. Propelling the reader into the bodies of the other creatures that share our world, The Many Selves of Katherine North takes place in the near future but shows us a dazzling world far, far from the realm of our experience.