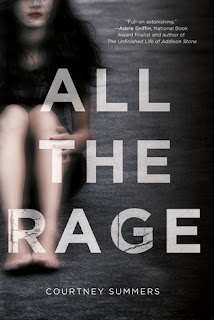 Warning: This book discusses rape. Not in great detail, but there are some flashbacks that could be very triggering.

In the library office we have just had a discussion about the way boys think that they can touch young woman in a suggestive way and call it OK. Why is it when a young woman is groped she somehow is paralyzed into silence- that also is not OK. This discussion in our library did not happen because of this book that deals with such issues in a more graphic intense way- it came about because it happens and has happened to those in our office who were discussing it- its not OK.

I love a review I read of this book... by Christy Love of Books on Goodreads.
Normally I wouldn’t read a book like this because the subject matter makes me … well, it makes me rage! But there’s no way I’m passing up a Courtney Summers book. All the Rage may be a work of fiction, but this shit is happening way too often in reality.
All the Rage follows Romy and the aftermath of her rape by the small town’s golden boy, who also happens to be the sheriff’s son. And it isn’t pretty. What’s so disgusting is, not only was she raped, she was continuously victimized everyday by the people around her. The other students tormented her relentlessly, while adults shamed and threatened her. She felt like she had no one to turn to. Can you imagine how that would screw with someone’s psyche?
This story is intense, gritty, and heart-wrenching. Summers does an outstanding job of capturing the pain and emotional trauma Romy endured. Romy is obviously suffering from PTSD and anxiety steaming from what’s going on in her life, so being in her head can be pretty dark. There are some truly poignant moments though, especially those involving Ava [when she’s apologizing for being a girl … ugh, killer moment!Then we get a ray of sunshine in the form of Leon. Sweet, patient Leon. He lives in a nearby town and has no knowledge of her past or the issues she’s dealing with. And she wants to keep it that way. Unfortunately, Romy’s emotional and mental state make it hard for her to fully let that light in, unsure whether it’ll burn or not. Plus, she’s just not used to the kindness from a guy her age. So it gets painful at times watching Romy try to navigate this unfamiliar terrain, while continuously getting assaulted by assholes.There’s also a bit of a mystery going on that involves a missing girl with connections to Romy. I really like the way everything unfolds, gradually putting the pieces together until it forms a clear picture. The ending is sort of open-ended and leaves the possibility of more. So I’m glad I read All the Rage despite wanting to avoid it. Now if only this kind of thing only happened in fiction.