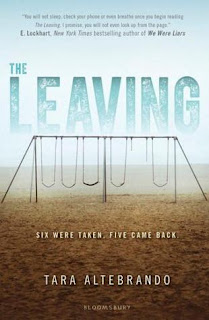 “Every time the woman turned her head, it was like she was posing for a picture with an Instagram setting that filtered out humility.”
― Tara Altebrando, The Leaving


"A whole generation oblivious to the truth of the human condition is a recipe for the collapse of society."- mate that is a scary statement and I reckon that generation is not to far away! We sometimes I think allow what is not right to occur because we somehow  allow tolerance and acceptance to override decency. Gun Control in the USA is a great example... homelessness is another. This quote I shall mull on over my lunch time meander!

The Leaving is a mysterious tale of six children who went missing without a trace and came back as 16-year-old teens who don't exactly remember everything happens to them in the past few years of their disappearances.And now everyone wants answers. Everyone wants to know the truth.

The Leaving was a bizarre blend of contemporary and intrigue that will leave readers wondering what is real and what we're manipulated to believe. Told from several points of view, Lucas and Scarlett who were both taken at five years of age and from the perspective of Avery, who's brother Max was taken and has yet to return with the other five teens. Scarlett is returning to a single mother, a former alcoholic who believes her daughter was abducted by aliens and has immersed herself in a support group of other returnees. Lucas returns to a tragic accident and now being questioned by the police. Based on how they gravitate towards one another, Lucas and Scarlett believe they may have been once in love, but the memory has been altered upon their return, along with Kristen, Sarah and Adam. It's Avery who is waiting for her brother Max to come home, the sixth child stolen and now seemingly missing. Avery doesn't believe that the returned group can't remember where they've been or who Max is, and is determined to conduct her own investigation fueled by jealousy and anger.- Kelly Goodreads.com