History of the Future 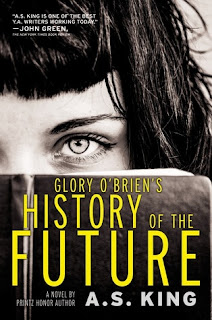 
“I wished I could take her to the library and hand her over to the librarians. Please teach her about everything, I'd say.” ― A.S. King, Glory O'Brien's History of the Future

In this masterpiece about freedom, feminism, and destiny, Printz Honor author A.S. King tells the epic story of a girl coping with devastating loss at long last--a girl who has no idea that the future needs her, and that the present needs her even more.Graduating from high school is a time of limitless possibilities--but not for Glory, who has no plan for what's next. Her mother committed suicide when Glory was only four years old, and she's never stopped wondering if she will eventually go the same way...until a transformative night when she begins to experience an astonishing new power to see a person's infinite past and future. From ancient ancestors to many generations forward, Glory is bombarded with visions--and what she sees ahead of her is terrifying: A tyrannical new leader raises an army. Women's rights disappear. A violent second civil war breaks out. And young girls vanish daily, sold off or interned in camps. Glory makes it her mission to record everything she sees, hoping her notes will somehow make a difference. She may not see a future for herself, but she'll do anything to make sure this one doesn't come to pass


“Maybe smiling at people would be my new revenge on the bullshit world.”
― A.S. King, Glory O'Brien's History of the Future

"Dark, gritty, poignant, and with a good dose of black humor, Glory O'Brien's History of the Future is an emotionally compelling story with a touch of strange"