The Sorcerer of the Wildeeps 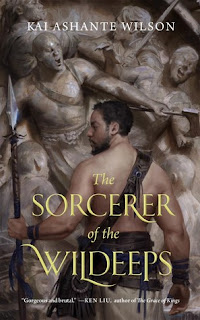 
Wilson plays with language and gender roles while spinning a world that has texture, taste and weight. The narrative is energetic and muscular and humanistic- Daniel

"Tell us, my son: how are you faring in those strange lands, so far from home? Whom have you chosen to walk with, to talk to: some good woman, some kind man? "

Since leaving his homeland, the earthbound demigod Demane has been labeled a sorcerer. With his ancestors' artifacts in hand, the Sorcerer follows the Captain, a beautiful man with song for a voice and hair that drinks the sunlight.The two of them are the descendants of the gods who abandoned the Earth for Heaven, and they will need all the gifts those divine ancestors left to them to keep their caravan brothers alive.The one safe road between the northern oasis and southern kingdom is stalked by a necromantic terror. Demane may have to master his wild powers and trade humanity for godhood if he is to keep his brothers and his beloved captain alive
Demane is a healer and sorcerer, working for a band of mercenaries who guard merchant caravans on the perilous road between market cities. Now, he must face the challenge of passing through the Wildeeps -- an enchanted jungle filled with deadly creatures virtually unknown in his own time and place -- where it will be up to him and his magics to keep his brother mercenaries, the caravan, and his lover safe!