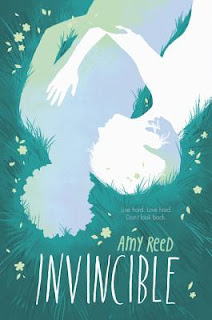 Evie is living on borrowed time. She was diagnosed with terminal cancer several months ago and told that by now she’d be dead. Evie is grateful for every extra day that she gets, but she knows that soon this disease will kill her. Until, miraculously, she may have a second chance to live.All Evie had wanted was her life back, but now that she has it, she feels like there’s no place for her in it—at least, not for the girl she is now. Her friends and her parents still see her as Cancer Girl, and her boyfriend’s constant, doting attention is suddenly nothing short of suffocating.
Then Evie meets Marcus. She knows that he’s trouble, but she can’t help falling for him. Being near him makes her feel truly, fully alive. It’s better than a drug. His kiss makes her feel invincible—but she may be at the beginning of the biggest free fall of her life.

This review is from Krutula
Invincible is the story of Evie, a cancer survivor whose life is in a downward spiral. While in the cancer ward, Evie had two best friends. They had a bond, something which wouldn't form in the normal world, but thrived in that terminal place. The novel is divided into two parts - one before a death, and one after. Evie, in the after, achieves a miraculous recovery; this is after she had made peace with the fact of dying. Now, she doesn't know what to do with this life, as well as her guilt for the other life that was taken. She starts acting out, develops a prescription drug addiction, and even then she can't find peace. Finding Marcus gives her some measure of happiness, but she is constantly searching for reasons to live.The fact with the book is, it started off really good. There is Evie, a girl who is sick and whose universe is now people who are dealing with the fact that she is sick. When she recovers, people are still treating her like she is made of glass. She abhors this, and on meeting Marcus, who knows nothing about her past, she finds within her a new girl who is brave and bold. But her problem lies in the fact that she feels guilty for being alive. I found that the author brought out this quite well - the despair, the loneliness, the emptiness, the hollowness that comes with not meeting expectations. But about two-thirds of the book, I was getting worn out by her spiral - once she wants people to care, then she doesn't want them to care. It was like her characterization wasn't set properly. Then comes the fact that it is depressing, like, really depressing. I couldn't stand to be in the head of a girl so dead set on ruining her own life, and pitying herself for it (though this is a fact that we all humans do so frequently) - probably because it sometimes hits too close to home. But the final nail in the coffin was that ending - which was set up so obviously for a sequel, that there was no completion in it. There was no resolution, even for a two-part story, and that bugged me a lot. Yes, she does make a decision, but she had been making and remaking that decision over and over again. It got repetitive by the end, and by that time any empathy I had was lost. In short, I think it started off strong but got lost in the middle.