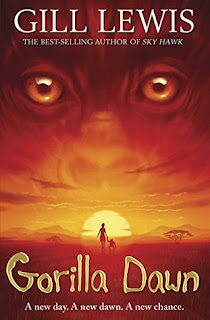 
Before she could walk, Gill Lewis was discovered force-feeding bread to a sick hedgehog under the rose bushes. Now her stories reflect her passion for wild animals in wild places. She draws inspiration from many of the people she has had the fortune to meet during her work as a vet, both at home and abroad. - Oxford University Press

The thrilling, heartbreaking, and inspirational new story from award-winning storyteller Gill Lewis. Deep in the heart of the African jungle, a baby gorilla is captured by a group of rebel soldiers. Imara and Bobo are two children also imprisoned in the rebels' camp. When they learn that the gorilla is destined to be sold into captivity, they swear to return it to the wild before it's too late. But the consequences of getting caught are too terrible to think about. Will the bond between the gorilla and the children give them the courage they need to escape?

"Gill Lewis has done it again - created a big themed story, introducing us to a part of the world most of us won't ever visit, some of us may not even be able to find on a map, but makes us curious and with that draws out empathy and compassion for people and an environment which in some senses feels far from our own, and yet has a very real connection with our every day life."-Zoe from Goodreads.com

A note from Gill Lewis: “The world is at our fingertips…or so it seems. We use our mobile phones and computers to connect with people far across the globe. And yet, they also connect our fate to that of the gorilla. The electronic devices we use every day contain rare minerals, many of which are sourced within the forests of the war-torn Democratic Republic of Congo, home of the eastern lowland gorilla. I wanted to tell a story, through the eyes of two children who have been swept into the conflict, that questions our responsibility as consumers of electronic goods; responsibility to insist on fair trade and conflict free minerals, and to actively protect our natural world.”