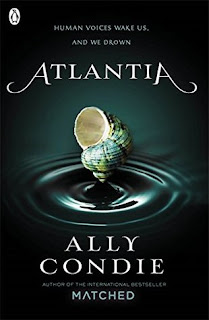 “We are not lost mermaids with seaweed hair and coins for eyes, but human girls, alive and found.
We are sisters, and we did not drown.”
― Ally Condie, Atlantia


Can you hear Atlantia breathing?For as long as she can remember, Rio has dreamt of the sand and sky Above—of life beyond her underwater city of Atlantia. But in a single moment, all her plans for the future are thwarted when her twin sister, Bay, makes an unexpected decision, stranding Rio Below. Alone, ripped away from the last person who knew Rio’s true self—and the powerful siren voice she has long hidden—she has nothing left to lose.Guided by a dangerous and unlikely mentor, Rio formulates a plan that leads to increasingly treacherous questions about her mother’s death, her own destiny, and the complex system constructed to govern the divide between land and sea. Her life and her city depend on Rio to listen to the voices of the past and to speak long-hidden truths.

"The world has been divided between Above - where the air was so polluted that people could no longer survive for long - and Below - where the people have been blessed with long and healthy lives. Rio, the main character, lives in Atlantia, an underwater city in the Below, and has long dreamed of experiencing what it would be like to walk Above, to feel real dirt between her fingers, to feel the sun on her face and the wind in her hair. Her twin sister, Bay, has always known that she wanted to stay underwater in Atlantia, the city she loves. When the annual ceremony celebrating the divide between Above and Below gives them the choice to either stay in Atlantia, or go Above arrives, Bay makes a choice that leaves Rio stunned - and alone. " Meggiebreee