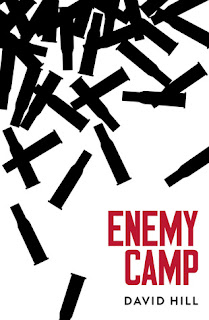 I knew someone who was a guard in Featherston at the camp where Japanese POW were sent. Mr Wilson  became good friends with the Japanese prisoners and forged life long friendships with them. They met often in peace time. But Mr Wilson still had stories, some he was not proud off as a New Zealander to tell. The bubbling undercurrents of racism and the lack of ability to differentiate between Japan the war enemy and individual men who were puppets in the regimes that made them soldiers. It frightened Mr Wilson....
It is well worth when you travel through Featherston to stop at the memorial and read the information boards and sit and be in a bit of our story- there is also a geocache there:).
This book is the story of Featherston and the events of THAT day!... The day it all turned bad. This story is true- Mr Wilson saw it!

It's 1942, and the tiny farming town of Featherston is about to receive hundreds of Japanese soldiers into its prisoner-of-war camp. Ewen, whose dad is a guard there, can't stop wondering about the enemy just down the road. Some say the captives are evil and cruel and should be treated harshly – or shot. But when Ewen and his friends ride out to the camp to peep through the barbed wire, the POWs just seem like . . . well, people.Then a new group from a captured warship arrives and the mood in the camp darkens. Guards and inmates begin to clash. As tension builds the boys are told to stay away. But on 25 February 1943, Ewen and his friends are there at the moment the storm breaks – and terrible, unforgettable events unfold before their eyes.

'We knew straightaway that something was happening. Extra men in khaki uniforms stood at the main gates. Behind the wire, figures in blue sat on the ground. None of the usual moving around, washing up, wrestling, anything like that. Just rows of prisoners, sitting silently.'