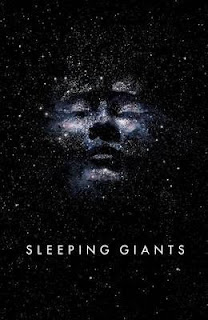 “It would make things easier for both of us, especially for you, if we could forgo the part of this conversation where you take me for a complete idiot...”
― Sylvain Neuvel, Sleeping Giants

Sleeping Giants takes several ingredients that always appeal to me ― geeky science, governmental conspiracies, a master planner with ice water in his veins, intelligent characters, and dry humor ― and folds them into a mystery about a very strange artifact. - Tadiana

In Sleeping Giants, a large, metal object shaped like a gigantic hand is found in South Dakota. It glows with its own light and scientists have no idea what it is made of or what it can do. And so, the mystery and adventure begins.

A girl named Rose is riding her bike near her home in Deadwood, South Dakota, when she falls through the earth. She wakes up at the bottom of a square-shaped hole, its walls glowing with intricate carvings. But the firemen who come to save her peer down upon something even stranger: a little girl in the palm of a giant metal hand.

But some can never stop searching for answers.

Rose Franklin is now a highly trained physicist leading a top-secret team to crack the hand's code. And along with her colleagues, she is being interviewed by a nameless interrogator whose power and purview are as enigmatic as the relic they seek. What's clear is that Rose and her compatriots are on the edge of unraveling history's most perplexing discovery-and finally figuring out what it portends for humanity. But once the pieces of the puzzle are in place, will the result be an instrument of lasting peace or a weapon of mass destruction?