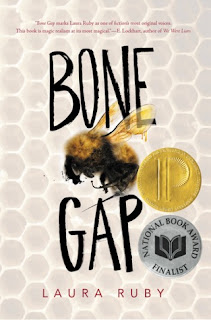 ‘Because we don’t have your typical gaps around here. Not gaps made of rocks or mountains. We have gaps in the world. In the space of things. So many places to lose yourself, if you believe that they’re there. You can slip into the gap and never find your way out. Or maybe you don’t want to find your way out.’

Bone Gap is a story about a girl named Roza that got kidnapped and a boy named Finn that saw it happen, but couldn't do anything against it. Sad thing is: nobody in their small town believes him.

Finn O’Sullivan was the only witness to the kidnapping of Roza, his brother Sean’s girlfriend. But when he wrestles with his memories trying to recall the face of the man that took her, he also remembers that she didn’t really put up a fight. So maybe she wanted to leave? It only seemed natural, after their mother left Finn and Sean as well so it would make sense for Roza to do the same. No one in the town believes his story, especially since the only way he can describe the man who took her is that he “moves like a cornstalk in the wind.“


"Trying to nail this story down to a single genre is a troublesome endeavor, but just know that it’s part mythology, part romance, with large parts of magical realism that is so relentless it often veers into straight fantasy. One of the most innovative stories I’ve read this year"- Bonnie- Goodreads.com